For several years now, sports professionals have been using data analysis to achieve their goals: improving results, developing potential, streamlining decision-making... A movie (Moneyball) was even dedicated to the appearance of this practice in baseball in the United States.

Esport has a huge advantage over physical sports in that a large amount of data from a match is recorded on the game server. Apart from the health data of the players, there is no need to manually enter the game actions, nor to set up devices to record the players' positions...

The entry cost to implement data analysis practices in esports is therefore relatively low, and all professional teams and structures would be well advised to use them generously to gain meaningful insights.

From February 5 to March 28, 2021, the PGI.S tournament was held in South Korea, where 32 of the world's best teams competed in PlayerUnknown's Battlegrounds (PUBG). Let's see what there is to say about it.

PUBG is a battle royale game. In esport, 16 teams of 4 players drop on a map. At regular intervals, a circle (zone) appears that shrinks more and more, which must be reached or else the health of one's avatar will decline. Players can be knocked down but reanimated (revived, or 'rezed' for resurrected) by their teammates if they intervene quickly enough. If they could not be revived, their game is over.

The team that wins the match is the one with at least one member who is the last player alive (Top 1), having survived the attacks of the competing teams and the damage done by being out of the zone (in the blue).

The different phases of a match:

Duration of phases and consecutive circles 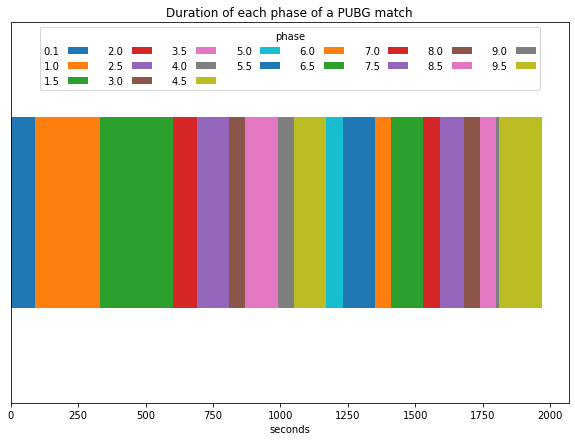 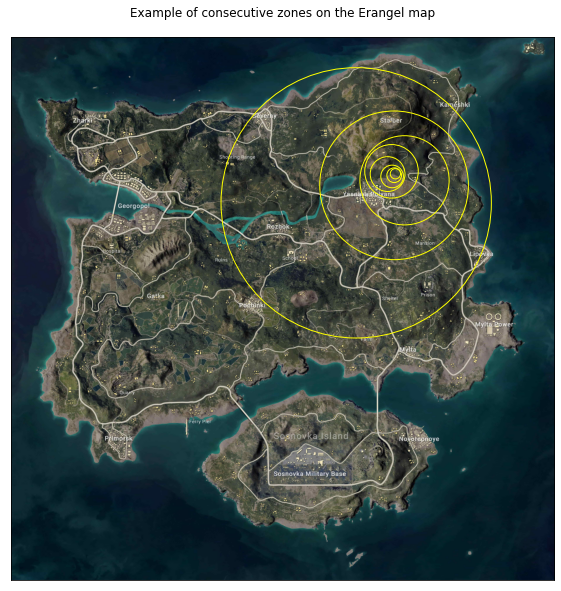 PGI.S and the "WWCD controversy"

The PGI.S innovated by creating weekly tournaments that saw different methods to determine the winner.

For several years now, the main tournaments have been using the so-called SUPER rules (for Standard and Universal PUBG Esports Ruleset), which among other things specify a point system that rewards the final placement in each match as well as the number of opponents eliminated (kills) during the match. Without going into detail, a team that finishes a match in 3rd place with 10 kills is awarded the same number of points as a team that finishes in 1st place with 5 kills.

During the PGI.S, weekly survival tournaments adopted a system rewarding exclusively the teams finishing in 1st position (WWCD for "Winner Winner Chicken Dinner", the text that the winner sees displayed on his screen when he wins a match).

For the teams, it changes the way they will approach the games.

PUBG Esports announced in early April 2021 that the next PCS4 (PUBG Continental Series 4) tournament would follow the WWCD format, rewarding the number of Top 1s achieved by each team, and only counting kills to break the tie.

A number of pro players as well as fans are vociferous in their rejection of this format. In particular, it is criticized for not rewarding the consistency of teams that regularly finish among the best placed and show skill in eliminating their opponents without winning the games, as well as for favoring chance and luck, arguing that a team dropping near the place where the last zone will appear can finish Top 1 without having had to do anything during almost the entire game.

The analysis of the data of the PGI.S matches which saw the co-existence of the 2 types of formats should allow to draw some lessons on this subject.

There are possible limitations to the results of this analysis:

Analysis of the PGI.S games

A total of 220 PGI.S matches were analyzed:

Duration of the matches 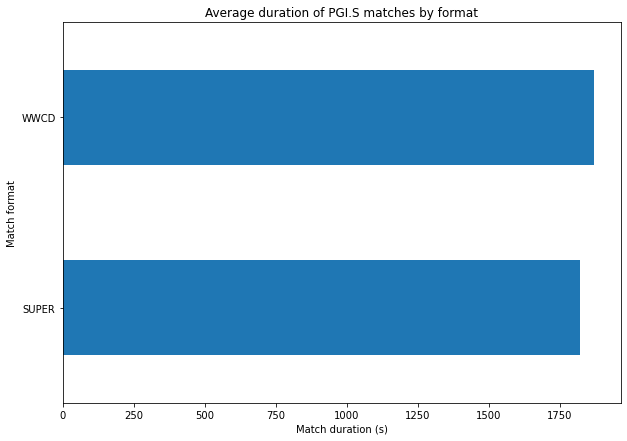 In any case, the majority of the matches ended in this phase 9.5 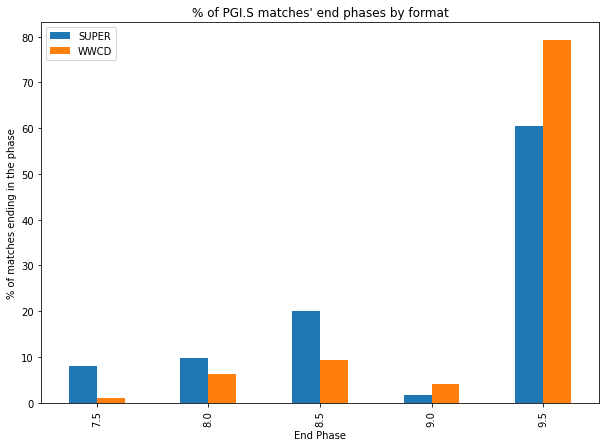 Number of teams and players alive by phase

In the WWCD format, on average the number of teams alive at the beginning of each phase is greater than with the SUPER format, especially in mid game between phases 4 and 8. This is less the case in the final phases. 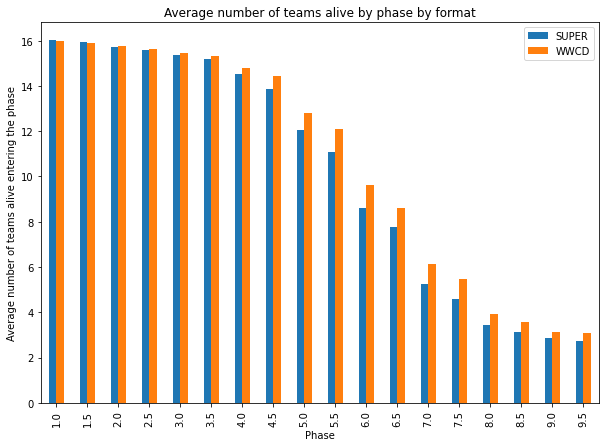 Number of kills by phase

The number of kills by phase allows us to observe that these kills occured mainly during phases in .5, i.e. the phases where the circles close.

The patterns are similar in both formats, but the kills happened later in WWCD than in SUPER. 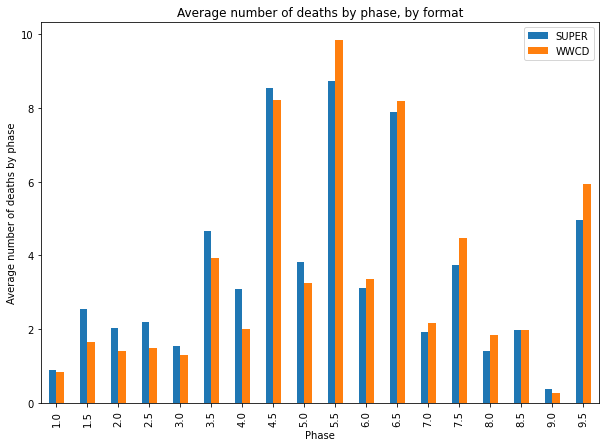 Rank in number of kills of Top 1 teams

While one of the controversies surrounding the WWCD format is that it does not reward the skill of eliminating opponents, it may be interesting to study the extent to which the teams that place first in a match are the ones that perform the most kills.

It appears that this is mostly the case for both formats. In both cases, for 90% of the games, the team that finishes Top 1 is one of the three teams that made the most kills during the game. However, the figures show that it was more common for the Top 1 team to have the most kills in the SUPER format than in the WWCD format (61% vs 54%).

On the other hand there were more cases in SUPER mode where the team that won the match was far from being the one with the most kills (including one match where the winning team was in 12th place in the kills ranking!)

In any case, we don't see the situation cited by critics of the WWCD format, of teams camping all game long only to win with a ridiculously low number of kills.

Numerical superiority is a classic in warfare strategies. Let's look at how this has translated into PUBG over the course of the PGI.S.

For the teams that made Top 1

The term circle luck is used to refer to teams that are in the circle, phase by phase, without having to move. The challenge for many teams is to bet on the location of the end zone to get there as soon as possible to ensure that they survive as long as possible.

Being in the circle

We measure here for each phase and for each final ranking, the percentage of cases where the team was in the circle

Being as close as possible to the center of the circle

We measure here for each phase, for the teams that made Top 1, the percentage of rank in distance from the center of the circle (rank 1 = closest team, rank 16 = farthest team)

Traditionally, each time a new circle appears, teams will try to move as close to the center of the circle as possible to limit the distance they have to travel to the next circle if it moves away (hard shrink). Teams that are already well placed in the circle will often not move to delay the moment when they will have to face the other teams and risk losing players or being eliminated.

Being as close as possible to the end zone

Unlike being closest to the center of the circle, which with the exception of the first circle is something that teams can control (by rotating), being closest to the end zone is the element of chance - and therefore luck - that PUBG has. Not knowing before phase 8 where the end zone will be, it should be noted that teams that were initially close to it may move away from it when they try to get closer to the center of the first circles.

We observe here to what extent this component of chance impacts the teams, and especially if it differs according to the SUPER or WWCD format.

The analysis of these data allows us to draw lessons that are certainly known by experience by professional players. To win a match:

Most of the patterns studied are similar between the two formats. The most visible differences are:

Further analysis could be interesting to try to identify possible reasons for the success of the teams: early vs. late rotations, playing in groups vs. split, being aggressive vs. patient, what are the characteristics of the teams that stay with 4 teammates alive the longest...

The upcoming tournaments implementing the WWCD format will allow us to collect new data and observe how professional players evolve to adapt to it.